A tough and close fight, with Taylor Harley winning on points against Mark Sarracino who fought till the bitter end... but it was Taylor's effective counters and strong clinches that made it possible to effectively neutralise Mark for a decisive win. ( pic below - Mark takes a massive blow )

Daddy Cool wins with a Split Points Decision. This aggressive match-up had Aaron ( Too Smooth 2 ) Leigh displaying awesome good hand combos, but did not seem to faze the latter who pushed forward in all rounds.

After suffering KO defeats in the last 2 match, the Preacher finally wins one in a close match-up against Wolf. It would appear that the fight could have gone either way but the Judges gave it to Bruce, probably due to the fact he appeared to be working hard throughout.

The two ex-season1 Contenders put up 'fight of the night' with Soren winning by TKO in the 5th round. For the first 2 rounds, the Scotsman troubled Soren with his sharp hands but Soren's technical expertise began to show as he reply with clean body shots and knees. Then came the brutal 'battle of the elbow' exchanges for both with Sean ending up with a face full of nasty cuts. Referee called the fight in round 5, as the cut was too deep - see pic below. Kudos to both.

A split second shocker in round 1 as Manue dropped the mighty Carnage for an 8 count; after which it was one-sided all the way. Carnage displayed his usual speed and power to the point of frightening. Manue went down from leg kicks by TKO in 2nd round; Carnage remains undefeated since Mid 2006.

In Contender Asia Season 1, Madsua ( aka Tum ) was holding pads up for JWP but he proved that he was more than just a bagman when the two got down to it...

A grand display of mastery/ effectiveness of the Muay Thai Clinch on the part of Madsua was the downfall of JWP in this match-up. Madsua kept his distance and evaded JWP's quick hands throughout; Time and again, Tum locked JWP whenever the latter got close and dragged him to the ground.. ( no less than half a dozen times )... Madsua wins by unanimous point decision.

With his win against JWP in Evolution 16, it was announced that Madsua WMC Samui has earn himself a opportunity to compete as one of the potential Thai representative for Contender Asia season two ( see IFMA web article ) 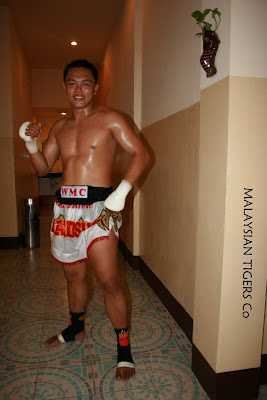 The other two Thai fighters who are in the race are Khem Fairtex ( aka Khem Sor Ploenjit ) and Singsiri Por Sirichai.

Nathan Corbett vs Emmanuelle Payet
what a fight!!!