Supposedly the final qualifier event, before the filming begins in April 2009... the above 8 malaysian MuayThai exponent will battle it out for the 2nd Malaysian Spot in Season Two. As host country... Malaysia is the only country who has been accorded two contestant... Be assured, there will be blood!!

Bernard Radin, seasoned Malaysian Muay Thai (kick boxing) exponent sprang a surprise by checking in early as one of the two Malaysia representatives in the second season of The Contender Asia - news extract from the Star ( Wednesday April 1, 2009 ) 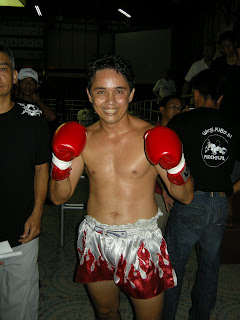 The Malaysian Tigers captain, who bagged the “Malaysia’s Ultimate Warrior” title two years ago, secured his berth at the King’s Cup meet at Bangkok, Thailand, in December.

The 37-year-old Sarawakian was in uncompromising form and ended his German opponent’s campaign with a convincing technical knockout victory. Bernard delivered his trademark power-packed kick and injured his opponent’s ribs just a few seconds into the three-minute first round.

World Muay Thai Council (WMC) Malaysia representative Muhd Shahnaz Azmi said Bernard had performed beyond expectations and they were delighted that an ideal Malaysian ambassador with outstanding personality had made the cut.

“Bernard has shown his courage and has not allowed his age to prevent him from advancing in The Contender Asia. There is no doubt that he is very determined to go as far as possible. Deep inside him, he is aiming to progress to the semi-finals. However, he will have an uphill task ahead to stamp his mark against younger competitors with better physique. Since November, he has been training diligently with the Malaysian Tigers squad at the Lamai Gym in Koh Samui, Thailand, to prepare for the challenge,” Shahnaz added. 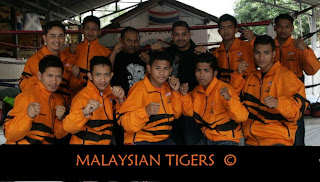 The Malaysian Tigers ( pic above ), comprising 13 exponents aged between 17 and 37 years, opted to be based in Thailand to gain exposure with quality sparring sessions and regular competitions, with at least a bout in a month.

Two hopefuls – Mohd Muinuddin Khadir and Faizal Ramli – from the camp returned home with the team recently to vie for the final slot to feature in the second season of the entertaining reality show at the Malaysia Super Eight Fights scheduled to be held at the Sultan Mohammed IV Stadium in Kota Baru, Kelantan, on April 24. 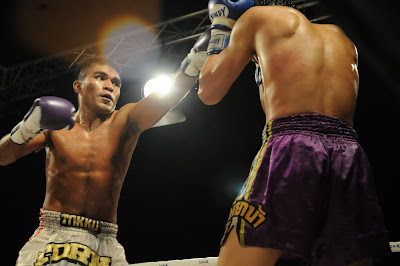 Tengku Shahrizal ( pic above ) will be starting off as the favourite, and he indicated he is a frontrunner when he knocked out younger opponent Hashim in the final of the Malaysia Super Four Fights as part of the International Muay Thai Superfights at Stadium Malawati in Shah Alam last July.

Underdog Khoo with vast experience and renowned for his everlasting endurance in the ring will be out to spoil the party.

Shahnaz also hinted that Faizal, who is known as the “Golden Elbow”, would be another fighter to watch out for.

“The eight challengers will be divided into two teams — Malaysian Tigers and Boxxwarriors Gym — and they will be drawn into the quarter-finals elimination rounds.

“We are expecting an open and closely contested affair, and the best Malaysian will join Bernard in action in the highly anticipated show,” he added.

Man... I think they get worked hard for this qualifications....

I am WONDERING who will represent Thailand? 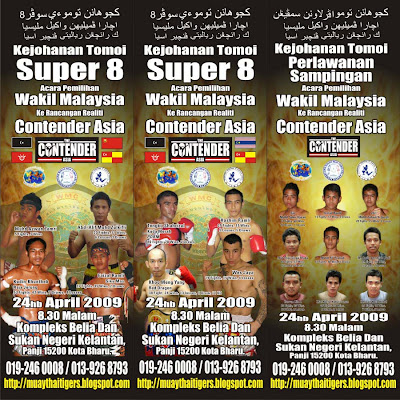 Prior to picking up the CA2 Qualifier Belt, he chalked up three victories defeating two Thais and a German opponent as well as picking up an Inter-Continental belt in the 70kg section during his oversea training stint in Thailand recently. Congrats!! 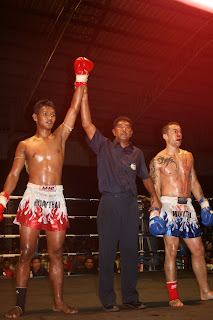 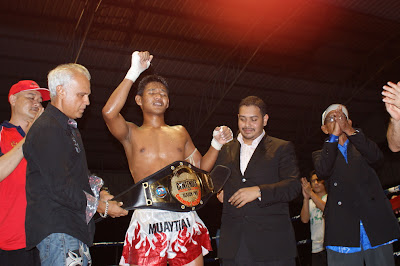 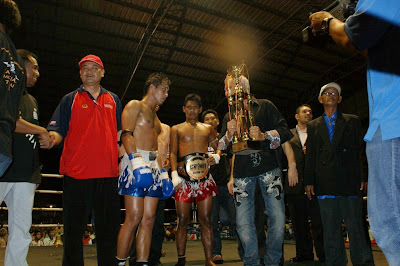